On July 4th, 2021), the communists of Moscow – the Moscow Maoists, their comrades from UCP, “Workers’ compass”, and “The Communists of Russia” – as well as independent journalists – went to the Embassy of Colombia on Burdenko Street to express solidarity with the struggle of the Colombian people against the neoliberal “reforms” of President Ivan Duque. 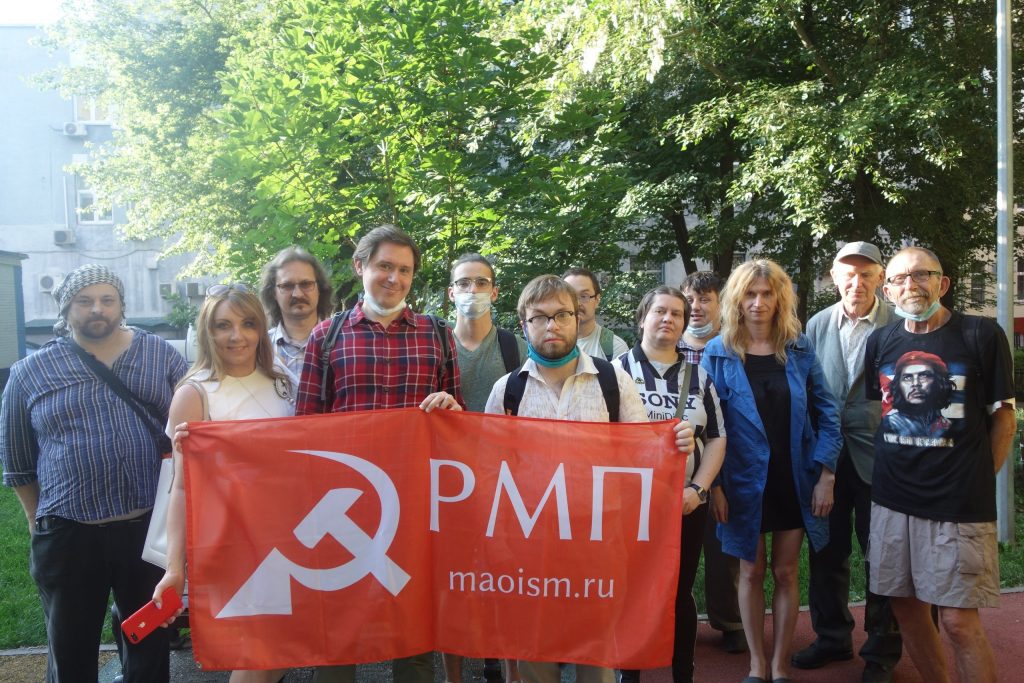 Mass protests in Colombia have been going on for more than two months. In April of this year, President Duque decided to implement a tax reform, the essence of which was to raise taxes. It appeared as if the “reform” was done for a good purpose: to increase funding for the “Ingreso Solidario” social program. About 3 million Colombians receive payments under this program, and Duque wanted to expand it by another 1.7 million. The problem is that the financing of this program for the poor comes from the poor themselves: from excise taxes (taxes on consumer goods). Plus, this program covers only about one fifth of the total number of people in need of social benefits.

In addition to the tax reform, Duque also proposed a reform of the health care system, which is basically privatization. The Colombian government had been criticized for its inept fight against the pandemic, as a result of which the country ranked third in the number of deaths from coronavirus in Latin America. The Colombian economy fell by 6.8% in 2020, which is the worst performance in the last 50 years of its history, while unemployment rose to 14% of the working-age population.

As a result, on April 28, Colombian trade unions, led by the Central Council of Workers (CUT), formed a National Strike Committee, and mass protests began throughout the country.

The confrontation between the authorities, the police, the ESMAD (police special forces) on the one hand and ordinary Colombians on the other, claimed the lives of 77 people, with another 124 injured, 2808 detained. 304 people “disappeared”, and 106 women were raped. 74 people lost their eyes. President Duque withdrew the tax reform bill on May 2; however, he did not abandon the plans to carry it out in the future, so the protests continued. On June 15, the National Strike Committee decided to temporarily suspend the mass protests (in fact, they did not stop) until July 20, when the parliament session resumes to present its demands in the form of a petition.

The requirements formulated by the committee are as follows: to ensure the protection of the health of citizens and medical personnel during the pandemic; to carry out mass and timely vaccination of the population; to provide social benefits to 7.5 million people; to protect domestic producers in agriculture and industry; to ensure employment of the population; to ensure food independence of the country; to solve the problem of peasant debts; to increase wages and pensions; to ensure the availability of education; to pass laws that protect women; to abandon the policies of privatization. 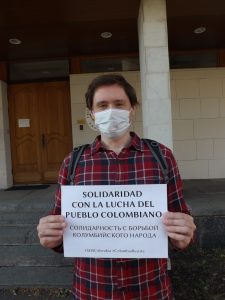 The Moscow picket in support of the just demands by the Colombians was generally calm. Comrades lined up in a picket line in front of the embassy, which is located on a quiet street near the “Park of Culture” metro station. Comrades provided interviews and talked peacefully with the bypassing citizens. A cyclist said that a movie based on Bulgakov’s “The Master and Margarita” was being filmed further down the street. Soon, by some curious coincidence, one law enforcement officer appeared, and after that their number began to rapidly increase. Concentrating around comrade Sidorenkova, who was holding a poster, they apparently grew bolder and went on the offensive, demanding from her to leave. When asked: “On what grounds”? “Why a single picket should not be held”? – a police officer in the rank of captain refused to explain anything, and then said that the comrades had organized a “rally”, so they would all be taken away for “violation of sanitary standards”.

The policeman also tried to break the camera of the journalist who was filming his actions, but then he retreated. Upon that, the comrades finished holding the picket line.

The title of Ernest Hemingway’s book “For Whom the Bell Tolls” is taken from a quote from the English poet John Donne. Its meaning is that there is no separately standing person, as we are all part of humankind. Therefore, the American from his book went to the war in the distant Spain to stop fascism. The attack on the rights of workers and working people in any country also affects all of us, no matter we are. If such an attack works for the authorities in Colombia – it will also work for the authorities in Russia. And if it turns out that another wave of crazy “reforms” in Colombia is stopped – all of us will succeed. The problems around the world are mostly similar in their nature. Therefore, it is important to show solidarity with popular struggles in other countries. Together we will win! Hasta la victoria siempre!

Register For This Site