Alexander Lukashenko’s regime is neither “red” nor progressive. Objectively, it expresses the interests of state-monopoly capital, linked with Russian imperialism and trying to maneuver between it and the West. The hopes that were pinned on Lukashenko in the mid-1990s as a “man of the people” did not come true. Today it is a regime of the Putin or Nazarbayev (ex-president of Kazakhstan) type. He is just as liberal in economics (he carries out privatization, restricts the rights of workers, raises the retirement age) as he is repressive and undemocratic in politics (he purged the political field from both the liberals and the nationalists, and from both the leftists and the real – not controlled by his administration – communists). Lukashenko makes nods towards the Soviet past, but in modern Belarus what has remained of it is at best an outer shell with a bourgeois content. And supporting someone out of nostalgia for the USSR is a big mistake.

The opposition to the Lukashenko regime, for the time being united by the figure of Svetlana Tsikhanovskaya (of course, she is only a symbolical figure), represents the interests of a part of the bourgeoisie dissatisfied with the existing regime. Both Tsikhanovskaya and the Belarusian opposition enjoy the support of the European Union and the United States, and orient themselves towards them. They also have business ties with Russia, with, for example, one of the contenders for the presidency of Belarus, Viktor Babariko, from 2000 to 2020 heading a subsidiary bank of Gazprom – Belgazprombank1. According to local communists, the bulk of the protesters on the streets were initially students, schoolchildren, and the petty and middle bourgeoisie. According to media reports, workers’ rallies have also begun at industrial enterprises2. The “single presidential candidate” program3 is a program of neoliberal reforms that directly requires large-scale privatization, deregulation of the economy, attraction of capital from TNCs, “optimization of the number of old jobs” (in other words, mass layoffs), etc. The program of the “single candidate” and the program of Tsikhanovskaya also contain progressive demands for democratization (to limit the powers of the president and the term of office at that post, etc.), to hold free elections. All other things being equal, competitive and open elections are better, but it should not be forgotten that “freedom” and “honesty” under capitalism are conventions that are meaningful to the extent that they can serve the socialist movement in eliminating exploitation and oppression. On the other hand, among the opposition there are also extreme right-wing forces advocating decommunization and so forth. With the available forces and in a matter of days, this situation cannot be reversed – this is clear theoretically and can be observed in practice.

The proletariat and semi-proletarian strata are almost not represented in Belarusian politics, as elsewhere in the former Soviet republics. The so-called left movement, split into many small organizations, tries to defend their interests. The creation of workers’ councils and the victory of people’s democracy, as an alternative to “Lukashism” and the liberal-nationalist opposition, are possible only if there is a powerful vanguard communist party relying on the proletarian and semi-proletarian masses of workers in the city and countryside. There is no such structure in Belarus yet, in particular, due to the long domination of revisionism of the Khrushchev-Brezhnev type, and also due to the state-capitalist regime, which destroyed the institutions of bourgeois democracy and the possibility of creating uncontrollable political structures, although it would be naive to hope that liberal democracy in itself will automatically open the paths for development for the communists. The current moment may become a chance for Belarusian communists to exit this fragmented state if they can use the social upsurge in order to mobilize, strengthen ties with workers and maintain themselves in the legal field. When the proletariat again becomes a political entity, then and only then will the bourgeois-liberal forces no longer be able to use the workers in their political games as cannon fodder.

The task of defining the strategy and tactics of the proletariat in modern Belarus belongs to the Belarusian communists. We welcome their promising work in this direction, including participation in the organization of rallies and strikes with demands that express the interests of the working class and the working masses. For our part, we condemn the violence on the part of the current Belarusian authorities and support the democratization of the political system – not, however, in doing so supporting Tsikhanovskaya and the Belarusian liberal opposition – we are in favor of nationalization instead of privatization, and against interference in the affairs of Belarus by the imperialists, whether Russian or Western. We must also develop international proletarian solidarity and communist cooperation in our common cause of propaganda, organizational construction and the preparation of socialism. 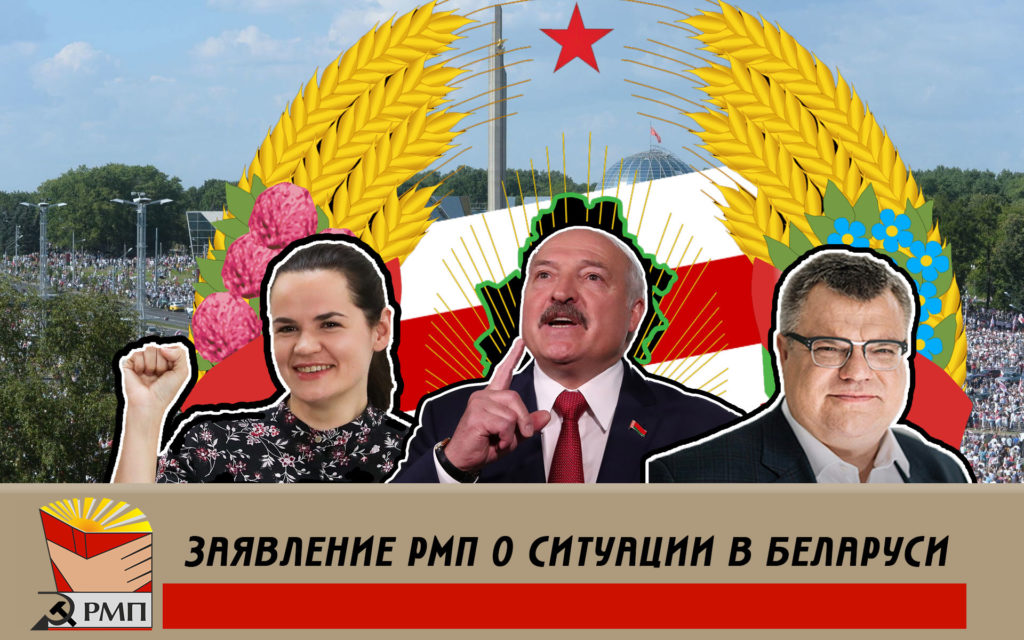 P.S. While we were working on this text, the situation continued to develop, and information appeared about the possible intervention of Russia in the state crisis in Belarus. On August 15, Lukashenko, after negotiations with Vladimir Putin, said that “at our first request, comprehensive assistance will be provided to ensure the security of Belarus”. The Kremlin does not rule out this either, hinting at “its readiness to provide the necessary assistance in resolving the problems that have arisen on the basis of the principles of the Treaty on the Establishment of the Union State.”4. The wording is rather vague, because Russia is playing a cautious game, supporting Lukashenko, while at the same time leaving open the possibility of agreement with the opposition if it comes to power. In a conversation with German Chancellor Angela Merkel on August 18, Putin said that Russia is against “any attempts to interfere from outside in the republic’s internal affairs, leading to a further escalation of the crisis.” This can be interpreted both as a warning to the European Union (which has still limited itself to the threat of sanctions), and as a promise not to interfere itself. Of course, the imperialists always lie, they will and do interfere in the affairs of relatively weak countries, dictating their will to them. In the case of Belarus, this is especially true of Russian imperialism, which dominates the republic. It is naïve to hope, as some do, that when “Russia comes” or “we will be in the European Union” life will spontaneously improve. Workers, not without reason, fear that a break with Russia will lead to the collapse of industry and unemployment, but another scenario is no less likely: in the case of concessions to Russia, it will demand a high price – the privatization of Belarusian state-owned enterprises, to which Russian “effective managers” will come, who will in fact will carry out Lukashenko’s threat, who frankly spoke about the “excessive number” of workers at the factories. It is necessary to appeal not to Russia or the European Union, but to the masses. Only they can show real solidarity and put pressure on their governments to respect the independence of other countries.