Only the first chapter of the pamphlet is published here. Read in full in FB2 format. 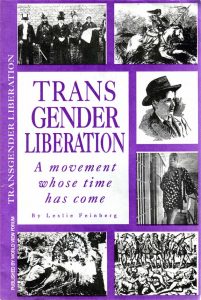 This pamphlet is an attempt to trace the historic rise of an oppression that, as yet, has no commonly agreed name. We are talking here about people who defy the “man”-made boundaries of gender.

All our lives we’ve been taught that sex and gender are synonymous—men are “masculine” and women are “feminine.” Pink for girls and blue for boys. It’s just “natural,” we’ve been told. But at the turn of the century in this country, blue was considered a girl’s color and pink was a boy’s. Simplistic and rigid gender codes are neither eternal nor natural. They are changing social concepts.

Nevertheless, there’s nothing wrong with men who are considered “masculine” and women whose self-expression falls into the range of what is considered “feminine.” The problem is that the many people who don’t fit these narrow social constraints run a gamut of harassment and violence.

This raises the question: Who decided what the “norm” should be? Why are some people punished for their self-expression?

Many people today would be surprised to learn that ancient communal societies held transgendered people in high esteem. It took a bloody campaign by the emerging ruling classes to declare what had been considered natural to be its opposite. That prejudice, foisted on society by its ruling elite, endures today.

Yet even in a society where there are harsh social penalties for not fitting, a large part of the population can’t or won’t change their nature. It is apparent that there are many ways for women and men to be; everything in nature is a continuum.

Many of the terms used to describe us are words that cut and sear.

When I first worked in the factories of Buffalo as a teenager, women like me were called “he-shes.” Although “he-shes” in the plants were most frequently lesbians, we were recognized not by our sexual preference but by the way we expressed our gender.

We didn’t choose these words. They don’t fit all of us. It’s hard to fight an oppression without a name connoting pride, a language that honors us.

In recent years a community has begun to emerge that is sometimes referred to as the gender or transgender community. Within our community is a diverse group of people who define ourselves in many different ways. Transgendered people are demanding the right to choose our own self-definitions. The language used in this pamphlet may quickly become outdated as the gender community coalesces and organizes—a wonderful problem.

We’ve chosen words in this pamphlet we hope are understandable to the vast majority of working and oppressed people in this country, as a tool to battle bigotry and brutality. We are trying to find words, however inadequate, that can connect us, that can capture what is similar about the oppression we endure. We have also given careful thought to our use of pronouns, striving for both clarity and sensitivity in a language that only allows for two sexes.

Great social movements forge a common language—tools to reach out and win broader understanding. But we’ve been largely shut out of the progressive movement.

It was gay transvestites who led the 1969 battle at the Stonewall Inn in New York City that gave birth to the modern lesbian and gay movement.

Many people think that all “masculine” women are lesbians and all “feminine” men are gay. That is a misunderstanding. Not all lesbians and gay men are “cross”-gendered. Not all transgendered women and men are lesbian or gay. Transgendered people are mistakenly viewed as the cusp of the lesbian and gay community. In reality the two huge communities are like circles that only partially overlap.

While the oppressions within these two powerful communities are not the same, we face a common enemy. Gender-phobia—like racism, sexism and bigotry against lesbians and gay men—is meant to keep us divided. Unity can only increase our strength.

Solidarity is built on understanding how and why oppression exists and who profits from it. It is our view that revolutionary changes in human society can do away with inequality, bigotry and intolerance.

In the spirit of building that fighting movement, we offer this view of the sweeping patterns in history, the commonality of women and men who have walked the path of the berdache, of the transgendered—walked that road whether we were held in high esteem or reviled.

Look at us. We are battling for survival. Listen. We are struggling to be heard.